How To Draw For Storyboarding (article) - MASSIVE collection of information about storyboarding. Most apply to drawing in general. Tons of useful knowledge here!

Excerpts From Cartooning the Head and Figure (pdf) - Jack Hamm

It’s the moment you’ve all been waiting for! It’s finally time for the actual art of your comic!

Well there’s a lot to cover here so strap yourself in and let’s get down to it. 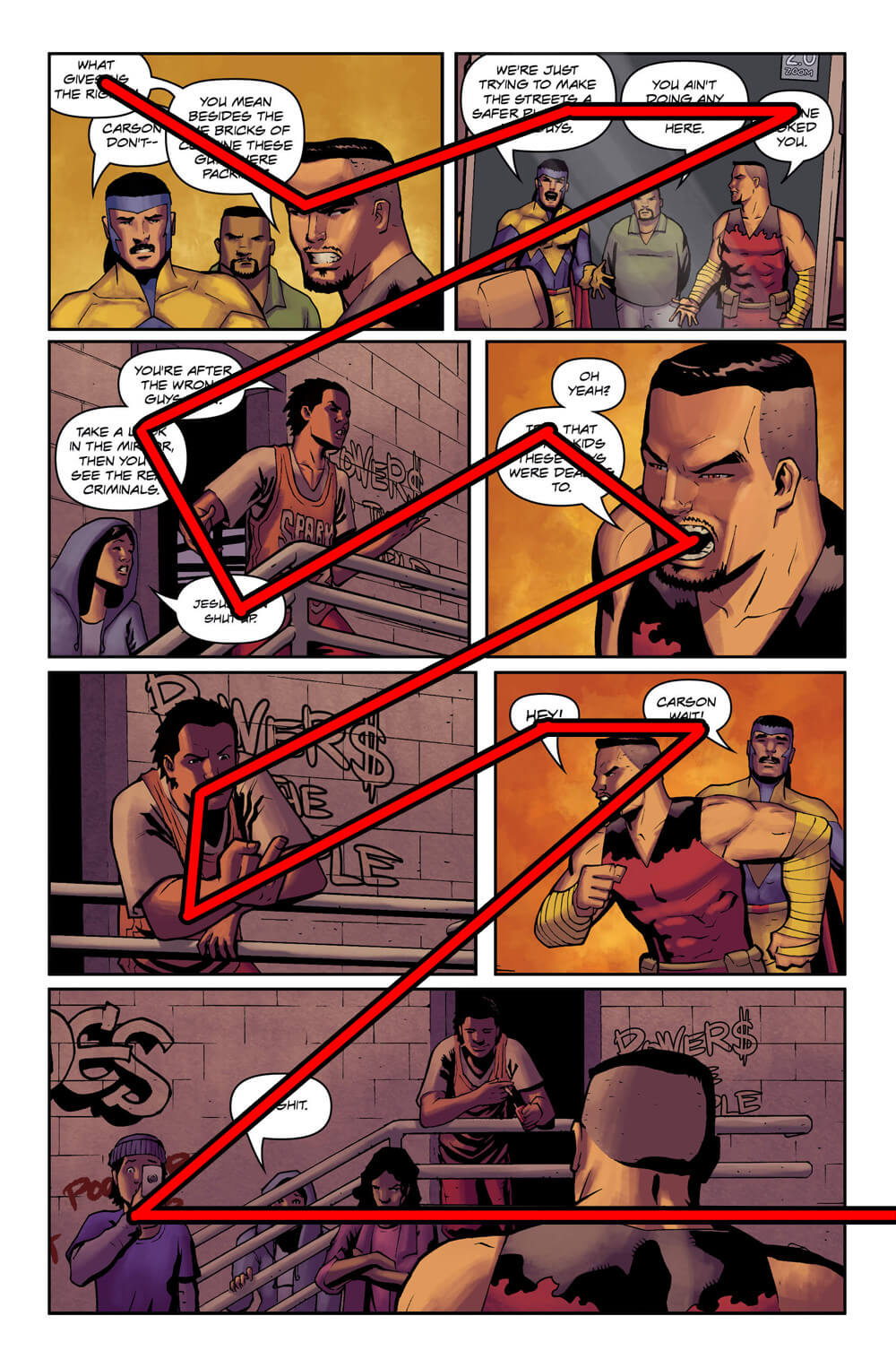 Use “leading lines” such as pointing fingers or limbs or the natural shape of objects, to help point the reader to the next panel. The direction characters are looking can also be used to guide the reader since we naturally want to look at things that other people are looking at. Some good examples of pages that do this well can be found here and here. 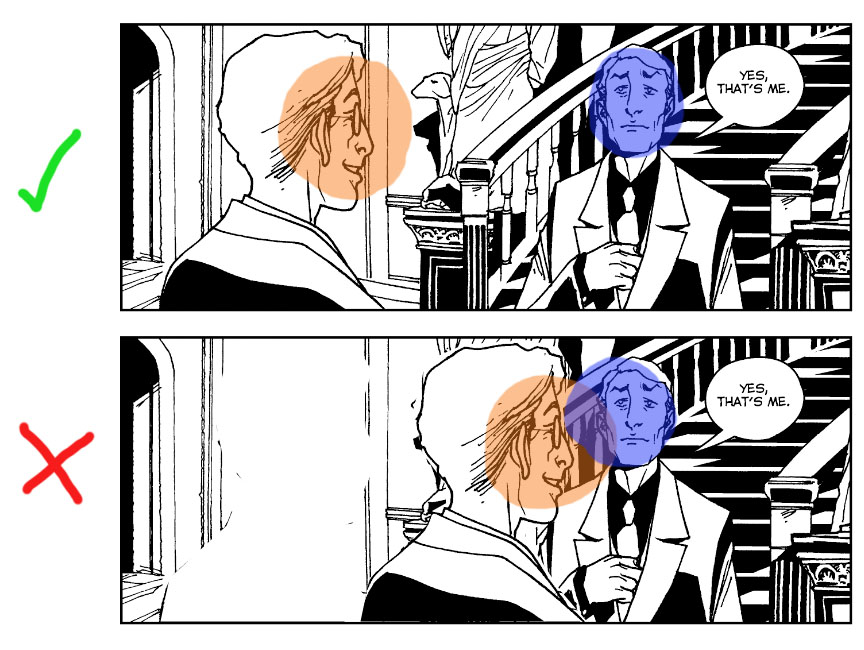 You can have multiple focal points within a panel but if you place them too close together they’ll be competing for the reader’s attention, resulting in a muddled and confusing experience.

Thicker lines are often used for elements in the foreground of a panel since they’re closer to the reader. Line thickness can also be used to draw or hide focus of certain elements within the panel because larger, thicker things tend to pop from the page and attract the eye first. 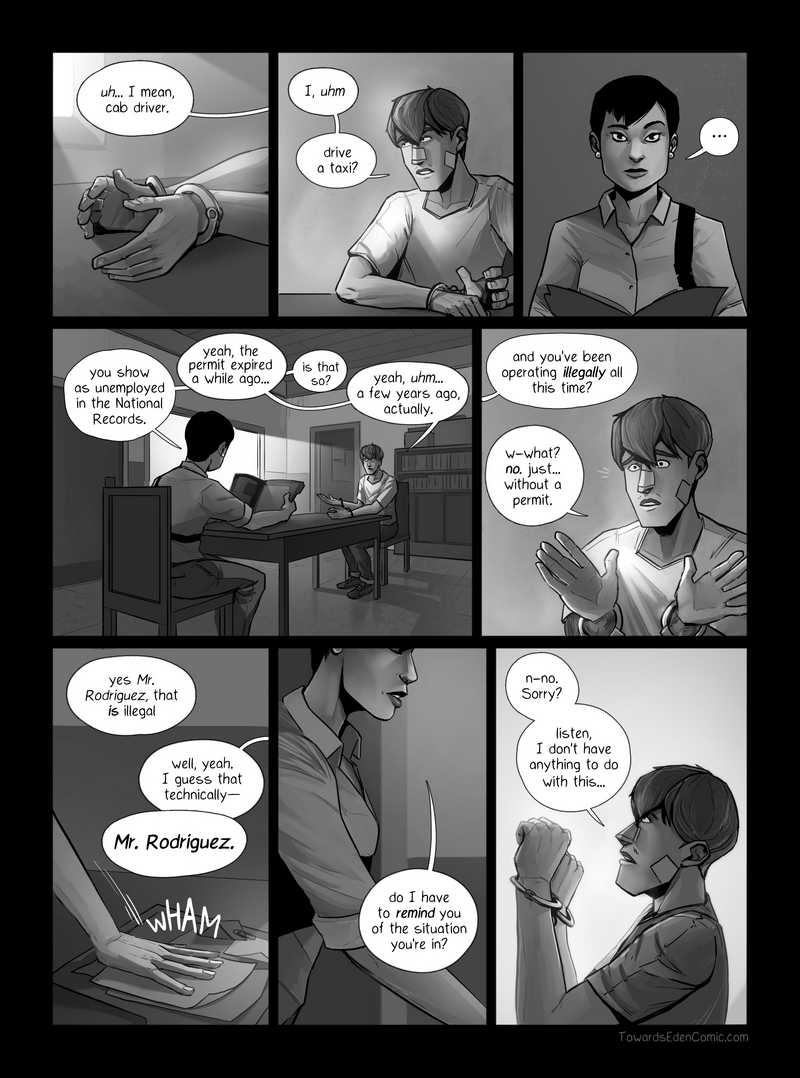 Notice how initially both characters are framed evenly. Despite the situation, neither seems to have noticeable power over the other. As we enter the second tier, the woman becomes larger in the frame. We see this reflected in the dialogue as the man is put on the defensive. By the third tier, the woman is framed significantly higher up compared to the man. The man has to look up to make eye contact with her. This, in combination with the dialogue, goes to show that she’s gained control of the scene.

Also notice where the camera is placed in that final tier. We’re on the same level as the man and thus are sharing in his experience. We’re looking up at the woman as well. She’s looking down on us just as much as she is on the man. 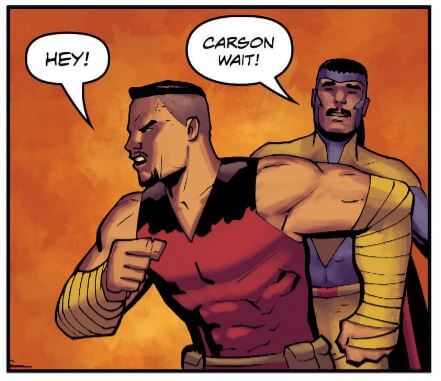 Two people evenly spaced in a shot shows us they’re in balance. If one character takes up a majority of the panel, forcing the other up against the border, we can infer that this character is in more control than the other.

Keeping the camera in the middle of the two characters makes for a more natural and intimate feel, while wider or over the shoulder shots can make us feel like observers. 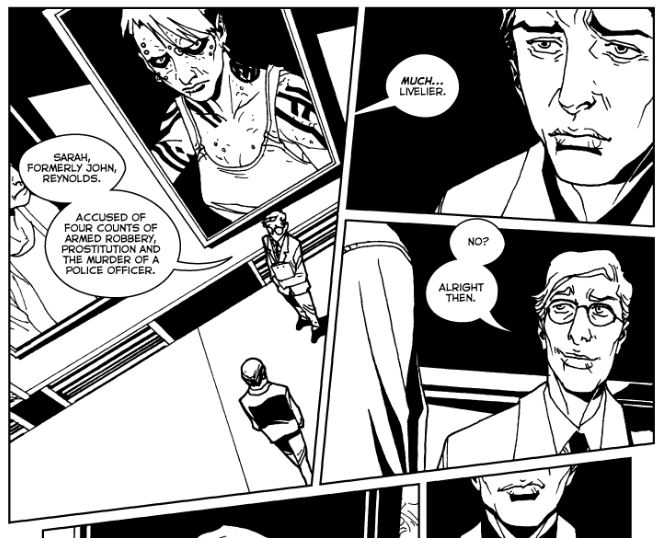 Placing the camera further away, at skewed angles, or obscured behind some scenery can add a level of unease, sometimes making us feel like we’re spying on the characters.

Backgrounds are important when setting a scene or if the setting itself is important to the telling of your story, but if the focus is on your characters and nothing else, adding a background could potentially become a distraction for readers.

Another thing to note is the more detailed a background is, the more it slows down the pacing of a scene. This is because detailed backgrounds give the reader more to examine within the panel. This is great for scene transitions where you want to reset the pacing but not so great when you want to start ramping up the stakes. For this reason, most action panels drop the background out completely.

You can also drop out a background to add special emphasis to a big moment or a shocking reveal.

There are many other factors that can help you decide the degree of detail you want to include in your panels. If you’re feeling unsure, remember everything should serve a purpose. If you can justify it, keep it in. 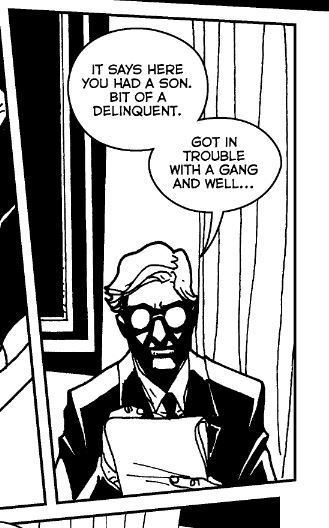 As a general rule, adding heavier shadows and higher contrast, especially to the muscles and bones of faces, increases the drama.