Okay so you have your scenes written out, now it’s time to really start building your script by breaking things down into pages and panels.

Again, I suggest you write your first draft freely. Let your story come out naturally at least once before you start a deep dive analysis on it.

That said, it seems that every story I write has at least one scene I just can’t seem to break down. I might have a general idea of what I want to have happen in the scene, but when I actually go to script it out, the words don’t come out right, or the panel structure is all wrong. If I’m really struggling to script out a scene, I use the following formula to help break the scene down into its components:

Each step has its own explicit purpose and by following them, I can create a solid, in depth script of each scene.

As I rearrange and rewrite scenes, I frequently jump back and forth between these three steps, so don’t feel like you have to complete each one fully before moving forward.

The first thing I do when breaking down a scene is to take my notes and split them up into atoms.

Mastering Comics by Jessica Abel and Matt Madden has an excellent section on atoms that I encourage you to check out but in an attempt to summarize: atoms are the elementary actions of a scene.

Atoms are snapshots in time, consisting of a single action or state change. A dog lies down. Someone smiles. A gun fires. Atoms are just about the lowest level you can break a scene down into. Any time something moves from one state to another, no matter how small the change, it can be considered as an atomic action.

Here’s an example scene from my comic:

Carson shoots fire at the drug dealer’s car. James shoots frost at the car to put out the fire. As the fire dissipates the car takes off. One of the drug dealers in the car spots Faith in the road in front of them, pulls out a gun and shoots at Faith.

Each of the above lines contains a single action.

There are a couple reasons to break out the atoms of a scene:

The Minimum Set of Atoms

Now, you don’t need to show absolutely every atom in a scene. A guy picks up a cup. He takes a drink. He puts down the cup. He picks up the newspaper… You can imagine how showing every single atom can get extremely boring for the reader. (Another tool that can be used intentionally by the way!)

What’s important is that there’s a minimum set of atoms you have to show for a scene to be comprehensible. If you have one panel with two people greeting each other, and the next panel is one guy dead on the floor… you’ve missed an important atom in the middle explaining what just happened. Think of your minimum set as the fewest number of atoms needed for a reader to reasonably be able to fill the gaps in between each element. These are the points you MUST hit when paneling the scene.

Once you have that minimum set of atoms, you can add more atoms as needed to enhance the pacing and mood of the story. Action scenes are fast paced, and so are usually written with fewer supplementary/non-essential atoms to match the high speed of the moment. Intimate scenes are slow, and can afford to add some more, non-essential, atoms.

All that said, I found that a lot of this part of the process can be glossed over. It’s not really necessary to break absolutely everything down. It’s just helpful if you’re struggling with organizing a particular scene.

Once I have all my atoms, I start dividing them up into pages. Here are a few tips to determine the best places to split pages: 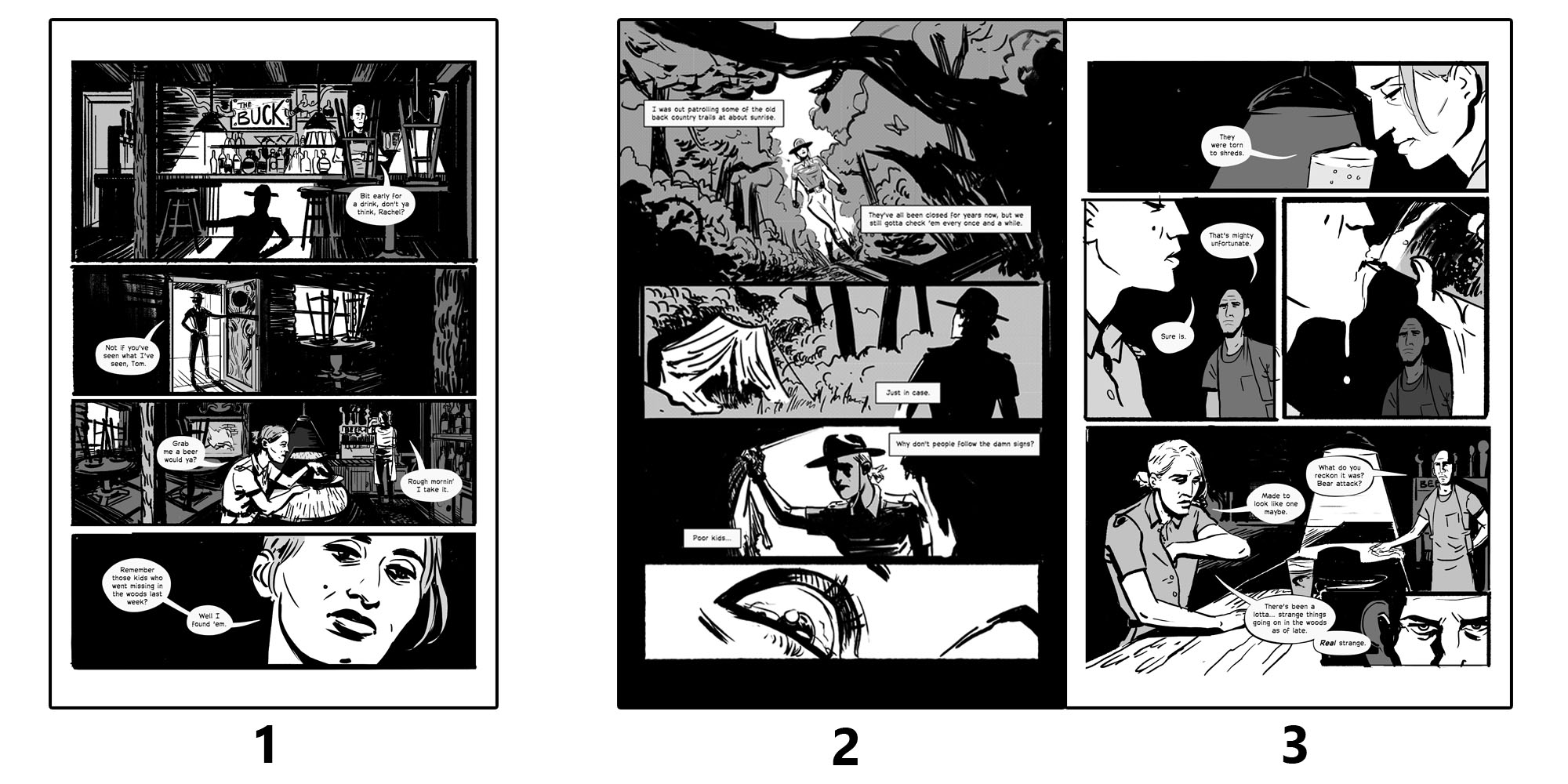 Of course planning page turns requires knowing what pages will be followed by such turns. Comics usually put odd pages on the right side of the book since books tend to start with the first page on it’s own. From there, pages two and three are together, four and five together, and so on. This isn’t a requirement however. Just know which pages (odd or even) will be before page turns, and time your page breaks accordingly.

Notice how the final atom acts as a sort of cliffhanger for each page. How will the heroes respond to the car escaping and where is it going? Does Faith get shot? These questions make us (hopefully) want to turn the page to find the answers.

At the same time though, each page feels like it achieves something. Carson shoots at the car, it drives away in response. The plot has progressed. Faith is standing in the road, the driver reacts by shooting at her. The tension grows.

Also notice how I divided the atoms here. I chose to split them up evenly, four per page. With that number, I can get a better idea about how everything is going to fit in the pages. Now, you don’t have to keep exactly the same number of atoms per page throughout your story, I just did so here because I wanted to maintain the same pacing across the two pages.

Once I have my atoms and page breaks, I can finally begin to construct my panels.

First off, what even IS a panel?

Well, when you really break it down, a panel is simply a snapshot in time used to express a series of actions. To put it in familiar words: a panel is a collection of one or more atoms.

Sometimes a panel will contain many different atoms and sometimes a single atom will stretch across multiple panels. The number of atoms that can fit in any given panel really depends on how parallelizable those atoms are.

This concept of “parallelizable atoms” is very important to grasp, so I pulled it into its own sub-section.

However the atoms “the person opens the door” and “the person closes the door” are not parallelizable. No matter how hard you try, it’s pretty much impossible to show both the opening and closing of a door in one drawing, at least in a readable way.

If two atoms are NOT parallelizable (and you need to show them both), it’s almost ALWAYS a good idea to split them up into different panels.

Unfortunately, things get a little more complicated when you add more characters to the mix.

I said earlier that “a panel is a snapshot in time” but that’s not always true. In fact, panels can actually be used to show the progression of time. A series of snapshots can exist, all within the same panel. 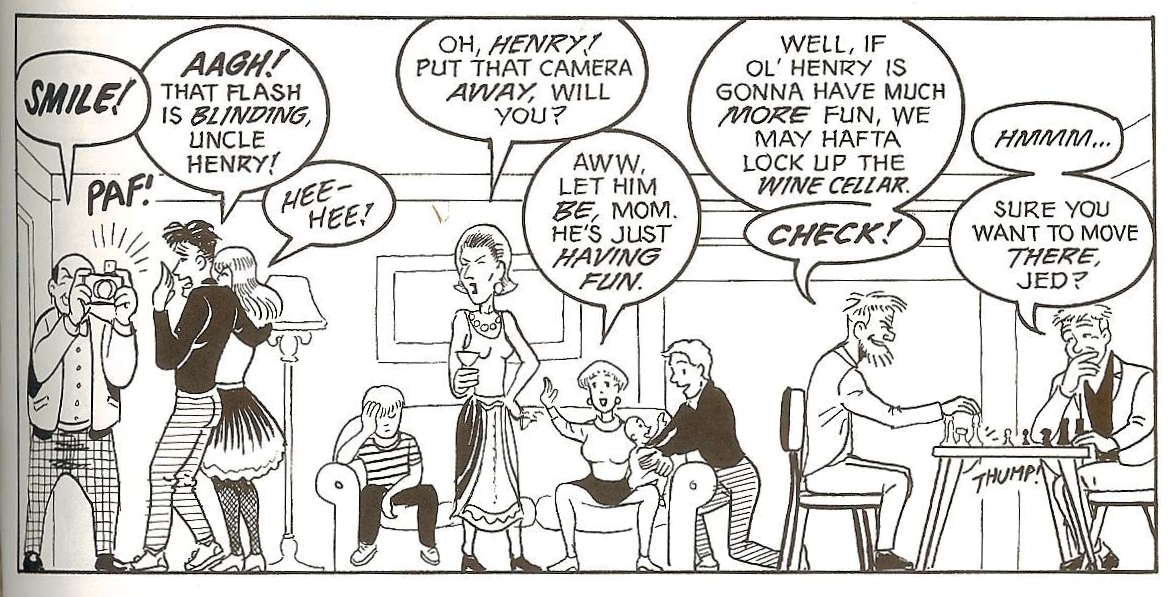 The above panel emphasizes this point perfectly.

As you read through the panel from left to right, time moves forward. The characters on the right side of the panel are at a later spot in time than those on the left. Here’s that same panel now split into different panels to make the time progression more obvious: 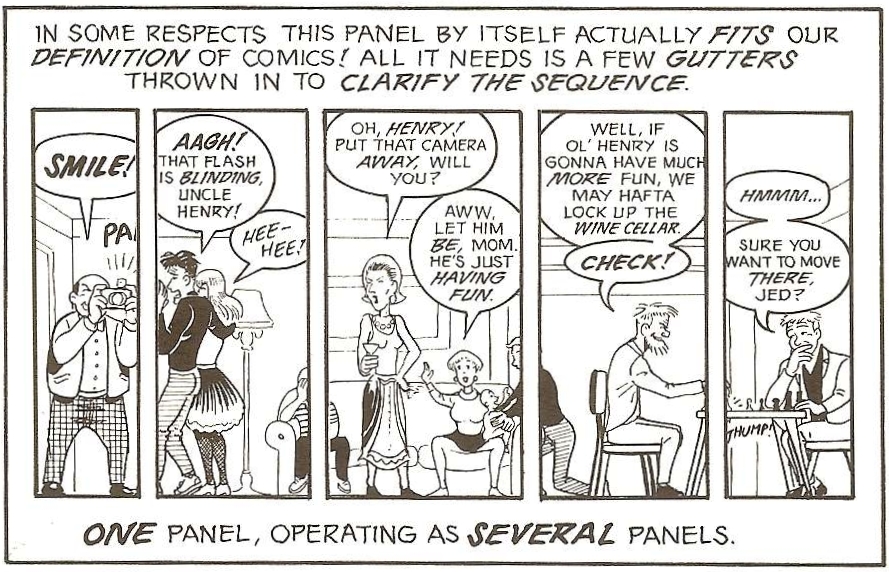 This effect can even be achieved in one panel with a single character: 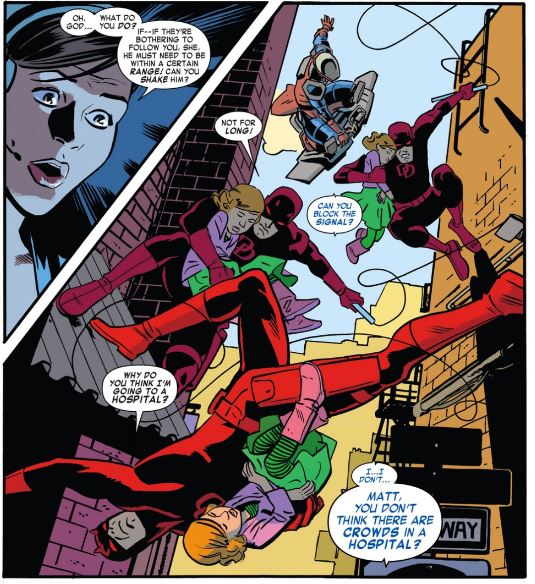 What really makes this effect work is the progression of the eye through the page. Just as people assume time is progressing forwards from one panel to the next, by constantly moving the reader forward within a panel, the reader will naturally assume time is moving forward as well. 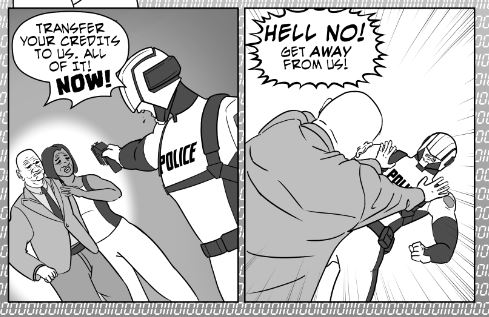 This is why most writers stick to a single exchange per panel. Character one says something, character two responds. The eye moves forward, time moves forward. Sometimes that exchange is even stretched across multiple panels.

Including a full back and forth between two characters in a single panel can often mess with the natural flow of time because it forces the reader backwards in the panel. It can work if done right but it’s hard to pull off cleanly. Having more than one exchange in a panel usually only works if the counter-response is spoken in the same tone as the original statement and if that character’s expression wouldn’t have changed much since their original line. 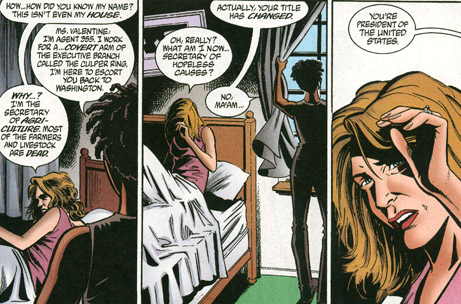 All this is to say that deciding when to merge parallelizable atoms together is a tough decision to have to make. After all, just because you CAN shove two actions together in a single panel, doesn’t mean you should. The answer to which atoms should go together depends on a bunch of different factors and is more complex than a simple yes/no answer.

Which brings me to…

Now that you have a better understanding of atoms and the progression of time within a panel, it’s time to start building those panels. For real this time!

My goal for this section (and remember I only get this granular when I’m struggling to break things down), is to take the atoms I have in a page, and convert them into panels.

Here are a few tips for how to do that: 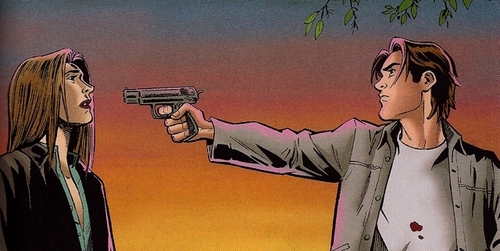 There’s just one action: Yorick pointing the gun. No dialogue. No other characters. That’s what makes the moment so more powerful. Some might even choose to stretch an atom like this across multiple panels.

Here’s that scene from earlier with the atoms merged into panels (with dialogue removed). Remember the atoms: 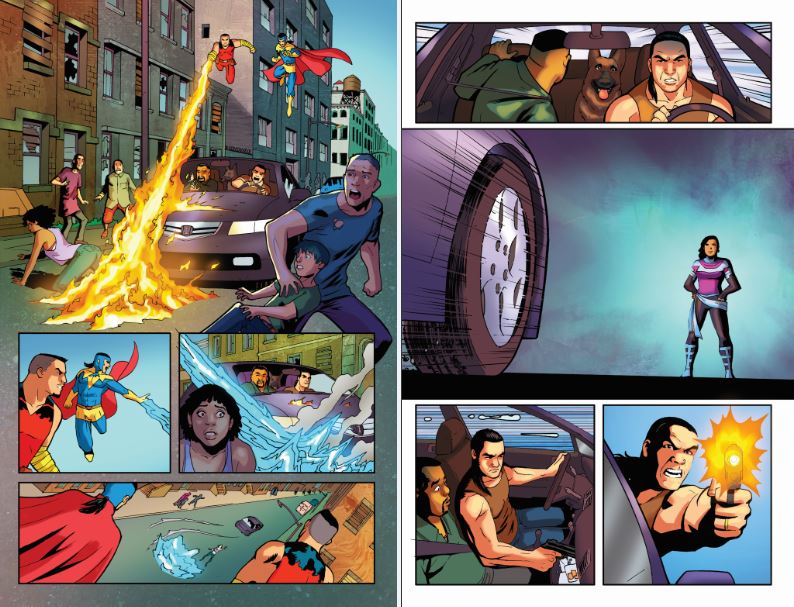 Okay okay I get it. Now that I have my panels broken down, how do I formalize it for my artist?

It’s time to write a script!