A big part of the lettering process is actually choosing what font to use, but before we do so, I want to discuss a question that I see come up a lot when it comes to lettering:

Should lettering be invisible?

There’s a common belief that comic lettering shouldn’t attract attention to itself. It should be essentially invisible to the reader.

I believe the reason why this is taught is because bad lettering is very obvious and can be a huge turn off for readers. Lettering as simply as possible is the safest option. While it won’t add anything to the comic, it probably won’t detract from it either.

Even though there’s nothing really wrong with that approach, I feel like it misses out on all the opportunities that lettering has to enhance a comic.

There’s so much you can do with lettering: 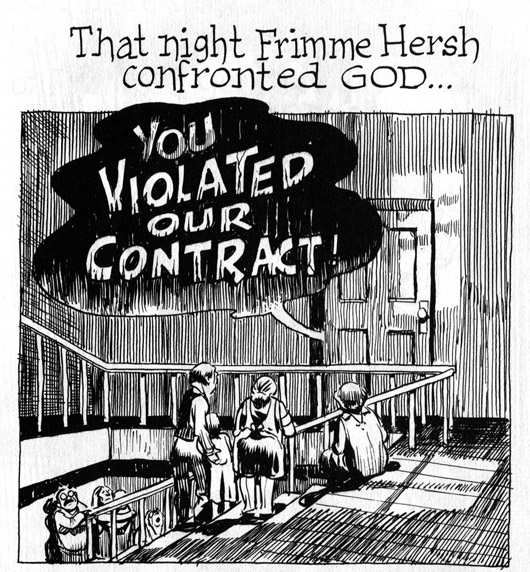 A Contract With God - Will Eisner

To sum it all up: When in doubt, keep the lettering simple, but don’t be afraid of letting it shine through when it has something to add.

What Font To Use

There are thousands upon thousands of fonts out there to choose from, so how do you know which is best for you?

Here are a few questions you can ask yourself to help narrow your selection:

A Guide to Hand-Lettering Your Strips - Chris Flick

If your art is done traditionally with pen and ink, you might want to consider hand lettering your pages to match.

Some people struggle with blending digital lettering in with traditionally inked and coloured art, finding that the lettering sticks out too much. Hand lettering a comic can be just as hard to pull off though and requires a lot of work compared to digital lettering.

Hand lettering is almost always done with the AMES guide, a tool for spacing out your lines and keeping them straight.

While I haven’t attempted hand lettering myself, I’ve linked to a few tutorials above that can help you get started with the AMES tool.

Ultimately the choice between hand lettered and digital is a stylistic one and something I can’t decide for you. When making the decision, choose the option that blends best with the art and if possible, enhances it somehow.

If you’re worried about the extra work required, there’s a neat tool called Calligraphr that turns your handwriting into a digital font. I haven’t used it myself but I’ve heard good things.

Here’s a list of sites where you can get digital fonts from. Make sure to check the licensing before using a font commercially!